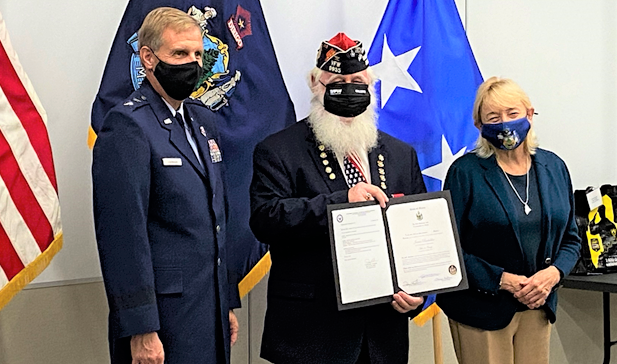 AUGUSTA — The reinvigorated Aides-de-Camp program, an advisory council of military veterans who advise the governor on policies impacting Maine veterans, recently held its first meeting.
On Oct. 6, 11 veterans representing all branches of military services, as well as two members of Gov. Janet Mills cabinet who are veterans – Public Safety Commissioner Mike Sauschuck and Corrections Commissioner Randy Liberty – were inducted into the Aides-de-Camp program at Camp Chamberlain by Mills and Maj. Gen. Douglas Farnham, the commissioner of the Maine Department of Defense, Veterans and Emergency Management.
Mills delivered welcoming remarks and, along with Farnham, awarded the newly appointed veterans with certificates. Bureau of Veterans Services Director David Richmond and Director of Strategic Partnerships Sarah Sherman provided a briefing about veterans programs and advocacy efforts in the state, including the Mobile Homeless Veterans Stand Down program, veterans’ suicide prevention efforts, the Maine Veterans’ Dental Program, and other veteran related issues. The Aides-de-Camp also received up to date status reports on several of the Bureau’s other ongoing operations and engaged in a question and answer session.
“The Aides-de-Camp program will assist the bureau greatly in its efforts to advocate for Maine’s veterans,” Richmond said. “It was evident by the enthusiasm in the room that we have just gained a remarkable level of experienced veterans that want to work together to help Maine’s veterans on a multitude of levels including homelessness, substance abuse disorder, transition from the military to civilian work and life, female veterans’ health issues, and veteran students.”
The Aides-de-Camp will meet quarterly at Camp Chamberlain in Augusta, and the inductees will strive to improve the lives of Maine’s veterans while serving as liaisons between their own communities and Governor Mills. Aides-de-Camp inductees included: