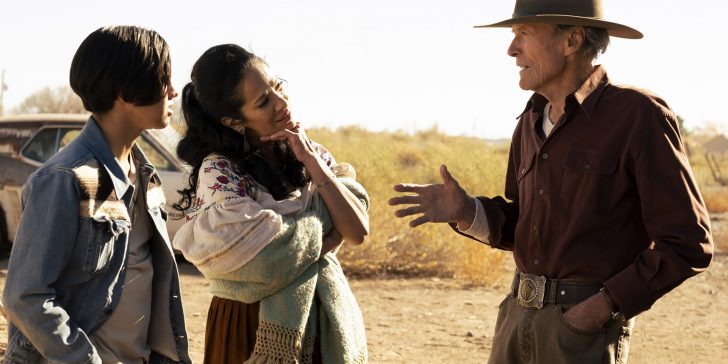 At 91, legendary actor/director Clint Eastwood remains pretty active behind the scenes, finding scripts he likes and bringing them to the screen. His latest find is a script that has been passed around for 30 years until now. “Cry Macho” is based on a book by author N. Richard Nash, who also co-wrote the script with Nick Schenk.
Mike Milo (Eastwood) was a star in the Texas rodeo circuit until a freak accident forced him into retirement. His ex-boss Howard (country singer Dwight Yoakam) one day tells him he wants Mike to locate his estranged son Rafael (Eduardo Minett) in Mexico and try to bring him back home. However, as Mike is about to find out, the job isn’t an easy one when he has to contend with the boy’s high-partying, abusive mother Leta (Fernanda Urrejola). Not to mention, Rafael lives his life on the streets participating in illegal cockfights with his prized rooster Macho.
Once the two of them make it on the road, they will have to deal with many obstacles in a hostile environment including the police and Leta’s right-hand man Aurelio (Horacio Garcia Rojas) trying to get the young boy back. Along the way, they stop at a small Mexican town, where they befriend a widow named Marta (Natalia Traven) and her grandchildren. But as they start to settle into a peaceful world, Mike will have to keep Rafael out of harm’s way if he plans to get the young boy across the border safely.
It’s a simple enough story for Eastwood to hone his workmanship as both actor and director. In fact, simplicity works pretty well in his favor when he treats it like an old-style Hollywood production and not a major blockbuster. The movie is mostly a quiet human drama concentrating on character growth rather than action. Younger viewers not usually acquainted with the Old Hollywood-type of movie will likely get bored with it within the first half. However, Eastwood’s older crowd are the ones taking it all in by this comfort food.
But then you have the script itself that is chock full of issues. First of all, the set-up feels clunky with character motivations feeling like stock characterizations from a soap opera. Then you’ll start to realize that it shares certain elements with Eastwood’s previous hit “Gran Torino.” You have the old and cranky white man striking a friendship with a younger person of color, goes through an enlightening journey, blends into a different family, and protecting the younger character from evil forces. Though the script was originally written three decades ago, it might’ve been modified to try to cash-in as an Eastwood picture. Finally, there’s a third act climax that wanted to rush things through without any real resolution to go by.
In spite of all that, the middle act is what brings the film together. The pleasant scenes in the little town with the main characters and the Mexican family give the film some life and laughs. Plus, it gives Eastwood a chance to work up his screen magnetism once more.
Besides his directing, Eastwood can still work well in front of the camera especially when he’s acting with his co-stars. He and Minett in a fine performance have some good scenes together with Macho the rooster adding to the fun. In his small role, Yoakam is also fine in the role though his character could’ve been played by anybody else who isn’t a country singer. Traven adds heart to the middle portion bringing some good chemistry with Eastwood and Minett.
Cry Macho is not definitive nor vintage Eastwood, but his a-typical work among his most recent films. It’s worth seeing at least once to see a great man still proving what he takes, but there’s still plenty of his other movies to seek out.
THE MOVIE’S RATING: PG-13 (for language and thematic elements)
THE CRITIC’S RATING: 2.75 Stars (Out of Four)