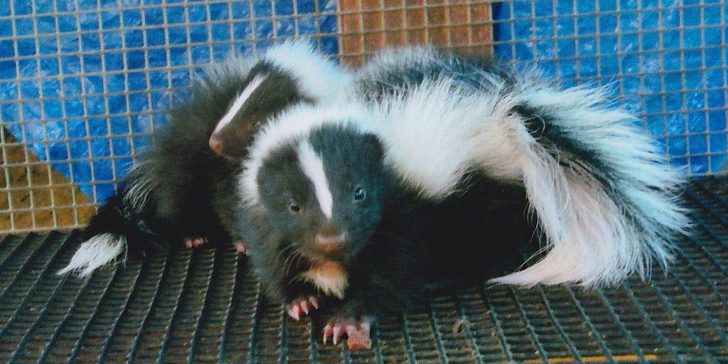 Over the past month, I’ve had the unexpected pleasure to see skunk families waddling along the side of the road. Just watching them makes me smile, so voila – the topic of this month’s column! I suspected Carleen had written about skunks in the past and sure enough, I found an article, some of which follows:
Delightful to behold – but little stinkers, literally! We have cared for many skunks over the years. Most have been weaned by the time they arrive at the Center. They have come in various sizes, from some that could fit in my hand to mature animals. This year [1996] I received a little one that needed to be bottle fed and I made a mistake I will not repeat. (If a young one chokes while nursing, don’t pat it on the back or you will wear skunk perfume!) 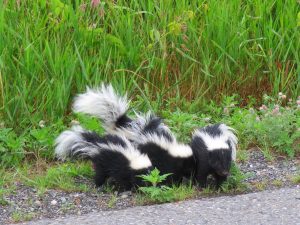 We have been asked many times if young skunks can spray. Yes, they can, and yes, we have been sprayed. The skunk will give warnings before it sprays – stomping its front feet while backing up, hissing, growling or running away, if possible. When these tactics fail, then it will resort to spray: it contorts its body into a “U” shape so that its head and rear face the enemy, contracts muscles and out comes the yellow, oil, stinky mist.”
I did some research on-line and found there are four species native to North America: Striped, Eastern Spotted, Hooded and Hog-nosed. While related to members of the weasel family, the skunk’s closest relative is the stink badger. Tail included, they average 20-30 inches in length and weigh 6-10 pounds. Their life span in the wild is usually two to four years, up to 10 in captivity. Skunks are adaptable as long as food and shelter are available and thrive in different habitats. They rarely travel more than two miles from their dens, typically settling down within a couple of miles of a water source.
Skunks are most active at dusk or night and are generally solitary except during mating season and when raising litters of four to seven kits, from April through June.
The young are born blind and deaf, but open their eyes after about three weeks and are weaned after about two months; they stay with their mother for a year, when she’s ready to mate again. The male plays no part in raising the kits. Skunks have strong front feet and long nails, excellent for digging up grubs, worms and insects (including bees and wasps); berries, nuts, fungi, bird eggs, salamanders and snakes are also on the menu as seasons change. Although they have poor vision, their sense of smell and hearing are excellent. They don’t hibernate, but are inactive during winter, often gathering in communal dens (tree hollows, brush piles, abandoned burrows and underneath porches or garages) for warmth. A group of skunks is called a “surfeit.”
That sulfuric spray skunks are known for? It has a range of up to 10 feet, can be smelled up to 3½ miles away and is powerful enough to ward off bears! They carry enough “chemical” for five or six successive sprays, requiring up to 10 days to produce another supply, and usually don’t spray other skunks except between males in mating season. Most predators learn to not attack skunks, but I found it interesting the great horned owl is an exception: in one case, the remains of 57 striped skunks were found in one owl’s nest.
Jayne here again. I asked Don about Petunia, a skunk Carleen mentioned in her article. Petunia was blind and could not be released, so he resided at Duck Pond for about a year. Sadly, he developed a cancerous growth on his neck and had to be euthanized. There are currently three skunk kits residing in carriers in Don’s kitchen, all under two months of age with an expected fall release.
The Wildlife Care Center continues to receive greatly appreciated assistance from other rehabbers to help with summer admissions while Don and Amy deal with health concerns. We ask that you check these websites to see if there is a rehabber closer to you to help make critter care at Duck Pond more manageable: www.mainevetmed.org/wildlife-rehabilitation [1] or www.maine.gov/ifw/fish-wildlife [2] Thank you.
— Donald Cote operates the Duck Pond Wildlife Care Center on Route 3 in Vassalboro. It is a nonprofit federal and state permitted rehab facility supported by his own resources and outside donations. Mailing address is 1787 North Belfast Ave., Vassalboro ME 04989; telephone is 207-445-4326; email is thewildlifecarecenter@gmail.com.
Links: —— [1] www.mainevetmed.org/wildlife-rehabilitation [2] www.maine.gov/ifw/fish-wildlife/wildlife/living-with-wildlife/orphaned-injured-wildlife/rehabilitation.html 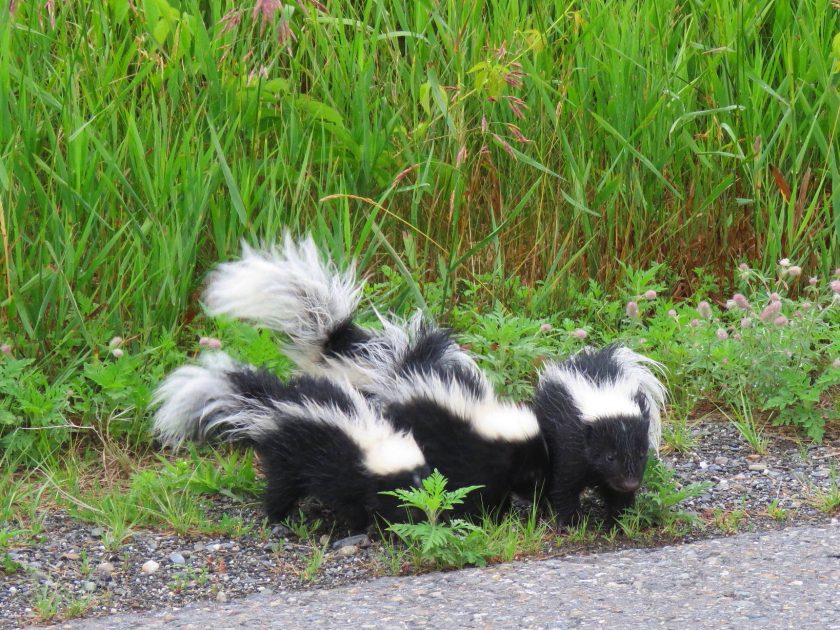