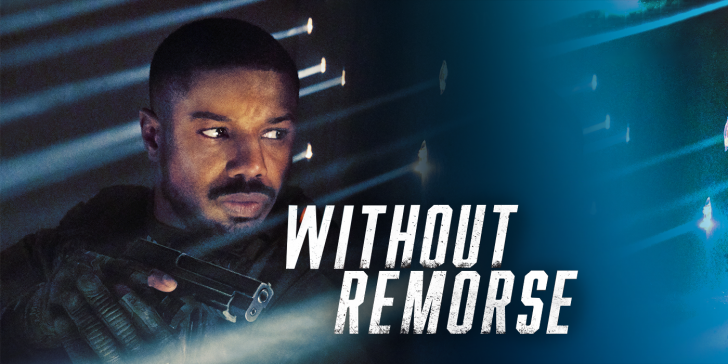 If you’ve been browsing around Amazon Prime Video as of late, you may notice a special section dedicated to late author Tom Clancy’s Jack Ryan series and movies called the Ryan-verse. From “The Hunt for Red October” to “Shadow Recruit,” as well as the John Krasinski-led TV series, viewers can find a wide variety of action and espionage from the comfort of their home. The latest entry to help widen this cinematic universe is “Without Remorse,” the first in a potential new series inspired by the “Rainbow Six” books and video games.
After a mission in Syria went south, Navy SEAL John Kelly (Michael B. Jordan) blames CIA agent Robert Ritter (Jamie Bell) for the mess and decides to retire to be with his pregnant wife Pamela (Lauren London). One night, a group of Russian assailants breaks into their home to try to execute them. John survives and manages to take out some of the intruders, but his wife isn’t as lucky. Down but not out, he begins a path of vengeance to find whoever’s responsible for the crime.
Secretary of State Thomas Clay (Guy Pearce) soon has John team with General Karen Greer (the niece of James Earl Jones’ James Greer from the earlier films played by Jodie-Turner Smith) and a new SEAL team to head to Russia and locate the surviving assailant. But as soon as they enter Russian airspace, the team find themselves in one tense situation after another as they try to survive the night. It isn’t long before John discovers conspiracy and corruption within the CIA as he uncovers a sinister plot to restart the Cold War.
For fans of Clancy’s books, this movie serves as a reminder of how not to adapt one of the author’s works more disappointing than “The Sum of All Fears.” The writers of the film. Taylor Sheridan (creator of “Sicario” and “Yellowstone”) and Will Staples (“Call of Duty” series) forgoes the smart and intelligent espionage of the earlier adaptations in favor of more knockdown action. The end result is a movie that doesn’t care about character development and straightforward plotting, but tries to cater to the video game crowd. When they do try to tell a story, they unnecessarily over-complicate things with trite story cliches and predictable plot points. The script is without a doubt the laziest thriller ever written in quite a while.
There are some good action scenes to be found especially the usual shootouts and some underwater action involving a sinking plane and a sinking car. However, it’s not enough to salvage a wildly mediocre script, which makes the experience shallower and more unrewarding. Even as a franchise starter, it doesn’t have anything to entice us about this part of the Ryan-verse other than maybe a cameo from either Alec Baldwin or Harrison Ford as Jack Ryan. Of course, if they do intend to launch the “Rainbow Six” film series, the next one should bring more personality to the main character plus give us supporting characters and a more interesting villains plot to help us get into it more.
The only real bright spot of this film is Jordan, who displays some action hero credentials of his own to bring his character to life. The “Creed” and “Black Panther” vet does a solid job with his charisma, while hones his own superhuman strength to the action scenes. Bell and Pearce play it one-note as their shadowy characters, while Smith tries her best to add something to her otherwise boring performance.
All in all, “Without Remorse” is the worst film to bear Tom Clancy’s good name along with the lesser-acclaimed “Rainbow Six” games. Fortunately, there are other Ryan-verse movies plus the TV series that are worth your time more. In the meantime, let this one stay in the same recycling bin along with the other junk found on the Amazon website.
THE MOVIE’S RATING: R (for violence)
THE CRITIC’S RATING: 2 Stars (Out of Four)