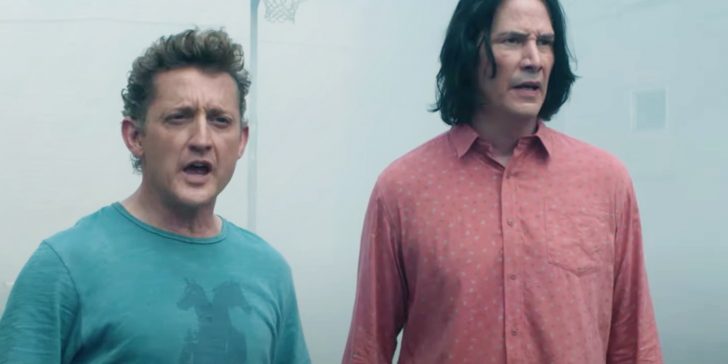 Here’s an unexpected yet pleasant surprise that came our way. Both “Bill & Ted’s Excellent Adventure” and “Bill & Ted’s Bogus Journey” were basically dumb sci-fi comedies with a loving charm that have made them fan favorites to this day. Now comes the long-awaited “Bill & Ted Face the Music,” which finds the main characters older but not-so-wiser in another time-hopping adventure. The original writers Ed Solomon and Chris Matheson return to pen the next chapter with director Dean Parisot (Galaxy Quest) taking the helm.
In the 30 years since their original adventures, Bill (Alex Winter) and Ted (Keanu Reeves) were successful as the rock band Wyld Stallyns before breaking up and raising a family together. However, their wives, Joanna (Jayma Mays) and Elizabeth (Erinn Hayes), are contemplating separating from the duo since their husbands can’t hold down jobs. Suddenly, Kelly (Kristen Schaal) daughter of Rufus (the late George Carlin) takes Bill and Ted to the future, where The Great Leader (Holland Taylor) warns them of an Earth-shattering disaster if they don’t come up with a world-uniting song. Realizing they have 77 minutes to do so, the duo figure they can use their old phone booth and steal that song from themselves in the future.
Meanwhile, their daughters Thea (Samara Weaving) and Billie (Brigette Lundy-Paine) take Kelly’s time machine to help their fathers by picking out different musicians of famous history to form a band. But with time and space coming apart fast, the Great Leader makes a desperate choice to have a killer cyborg (Anthony Carrigan) to hunt and kill Bill and Ted. Eventually, all the characters find themselves in hell, where they need the help of Death (William Sadler) to bring them back.
When it comes to these movies, you have to leave your brain at the door and enjoy the ride. They aren’t meant to be profound and deep, but an excuse to watch two airheads spend 90 minutes traveling through time and space without making any logical decisions. With that said, you have essentially two likable and endearing characters interact with both history and the heavens in such hilarious fashion that’s impossible not to enjoy it.
Fortunately, this film continues that trend with a more straightforward story and the same humor that remains fresh. Despite feeling consistent with the other films, the visuals were obviously updated with modern-day CGI rather than those old-style optical and in-camera effects that characterizes 1980s cinema. For example, hell now looks fully realized with landscapes and demons galore rather than the Burton-esque-by-the-way-of-Caligari style of the second film. Still, everything’s nice to look at especially when you’re having fun with the adventure.
By comparing the two plots of Bill and Ted meeting their future selves and their daughters meeting historical musicians, they’re sort of a ying and yang between them. On the one hand, Bill and Ted’s plot is full of funny moments plus some surprisingly poignant moments. But with the daughters’ subplot, it doesn’t carry the same fresh appeal and it’s more like a rehash of the first film. But once Death re-enters the film, the movie gets back on track to its spectacular conclusion. Then the movie quickly ends, and you’ll find yourself wishing for more.
For those not sure how these two actors in their mid-50s would play the same characters they’ve done three decades earlier, both Reeves and Winter ease back into their roles wonderfully like they know it. Winter has the charisma to pull it off, while Reeves is at his most natural self that everybody could recognize. Weaving and Lundy-Paine play the daughters with enough likability to make their subplot somewhat worthwhile. The rest of the cast also has enough funny moments to make the whole thing a hilarious, fun-loving experience.
“Bill & Ted Face the Music” is certainly a surprise, and it works out well that way. It’s simply funny in a lot of places and the nostalgia appeal will be enjoyed by long-time fans and newbies. If you never saw a Bill & Ted film, take the time and watch this trilogy for the crazy fun and humor.
THE MOVIE’S RATING: PG-13 (for some language)
THE CRITIC’S RATING: 3.25 Stars (Out of Four)