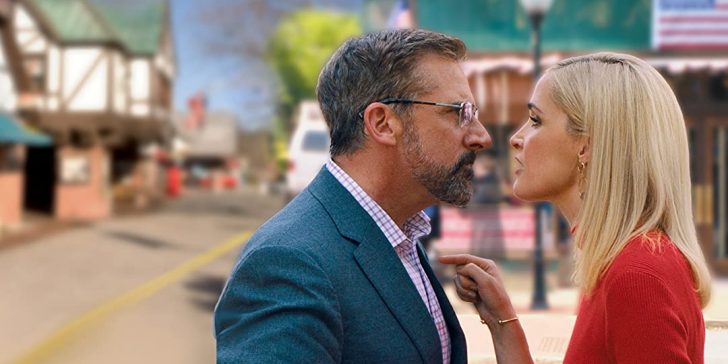 This election year, we find ourselves in the middle of a battle between Republicans and Democrats, conservatives and liberals, and left-wing/right-wing animosity. Fortunately, former host of “The Daily Show,” Jon Stewart, is here to guide us through the political chaos as the writer and director of his new satirical comedy “Irresistible.” The movie shows what could happen if you put somebody from Washington’s elite in a fish-out-of-water small town story.
After a humiliating defeat in the 2016 presidential election, Democratic strategist Gary Zimmer (Steve Carell) finds a way to bounce back from it. He watches a viral video of a farmer named Jack Hastings (Chris Cooper) arguing with local mayor Braun (Brent Sexton) over an amendment. Soon enough, Zimmer travels to Deerskin, Wisconsin, to convince the former U.S. soldier to run for mayor in an upcoming election. With the help of the kindly townsfolk, including Jack’s daughter Diana (Mackenzie Davis), Gary uses his know-how to convince the local population to vote for their small-town hero.
However, Gary’s Republican rival Faith Brewster (Rose Byrne) comes to town to help Braun with his re-election. It then turns into a game of one-upmanship as the two strategists use everything including ads and sponsorships to get more votes. But in the lead up to the day of the election, it becomes clear what this small-town race was actually all about.
Stewart brings his signature brand of humor about Washington politics invading small town America. There’s the expected mud-slinging between different parties at play that becomes a hilarious battle of wits. Unfortunately, it doesn’t go very far as it lacks the sharp bite that other films like “Wag the Dog” and “Election” to get the point across. While there are some funny moments between the characters, it’s not enough to keep our attention to the satire presented. The movie could’ve added some slapstick or something surprising to give the humor more of an edge to help enhance the story.
But in all fairness, Stewart does try to add some heart by having Jack and Diana be the small town’s backbone against the stuck-up attitudes of Gary and Faith. Unfortunately, the movie doesn’t give them enough of an impact on the main character to have him gain a better understanding of the folks around him. It makes the last-minute, third-act plot twist feel meaningless especially when it feels like a reverse “Truman Show” without the cleverness of the satire. If Stewart really wants to get the point across in his satire, maybe the movie would’ve worked better in a mockumentary-style comedy like his time on “The Daily Show.”
Carrell does give it his best having some funny moments of his own like he’s playing Michael Scott from “The Office” if the character went into politics. Byrne nicely holds her own especially when she shares her scenes with Carrell. Both Cooper and Davis have some good supporting turns that help elevate the movie with both humor and heart. If the movie went for that mockumentary route, Stewart would’ve played commentator to the events as it unfolds with his own use of one-liners.
“Irresistible” knows what it’s trying to say, but doesn’t do enough to make it a great political satire for our times that it could’ve been. Fans of Jon Stewart might enjoy it, but those who expect better from him will come out of it pretty disappointed. You’ll forget it once you see it and then binge-watch episodes of “The West Wing.”
THE MOVIE’S RATING: R (for language including sexual references)
THE CRITIC’S RATING: 2.5 Stars (Out of Four)