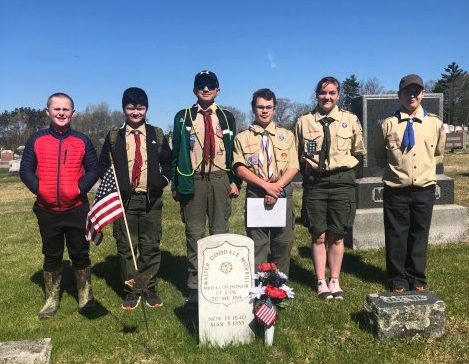 PITTSFIELD — The first line of the Scout Oath begins with “On my honor, I will do my best to do my duty to God and my country…” Patriotism is an essential component of the scouting movement.
Given the circumstances associated with the COVID-19 pandemic, the members of Troop 428, of Pittsfield, realized that their Cub Scout pack was not going to be able to carry on their tradition of setting out the flags on veterans graves in Pittsfield. In order to meet the conditions set forth in response to COVID-19, the members of the troop contacted the town sexton and agreed to strictly limit their numbers and provide for health precautions. A small sacrifice that allowed the troop to perform their duty to country, whether the member was able to be present or not.
On May 19, the Scouts began with first honoring Walter Goodale Morrill. Why Morrill? They began with him because Lt. Col. Morrill was awarded the Medal of Honor for his actions at the Second Battle of Rappahannock Station on Nov. 7, 1863 during the Civil War. This was not his only notable act of valor. During the Battle of Gettysburg, a then Capt. Morrill, was reported to be “The coolest man in the regiment — a man who had no superior on the skirmish line. Morrill led his unit at the decisive point of the bayonet charge without orders. His contingent created the impression of two regiments rushing through woods, though it consisted only of 44 Company B soldiers and 14 U.S. Sharpshooters,” according to Wikipedia.
The troop is grateful to the Scouts who were able to come out, those who sacrificed by staying home and Purple Heart recipient Peter Snow (town sexton) who respected their need to perform their duty to country. They were further supported by Erica Peloquin, Pittsfield Scouts BSA.