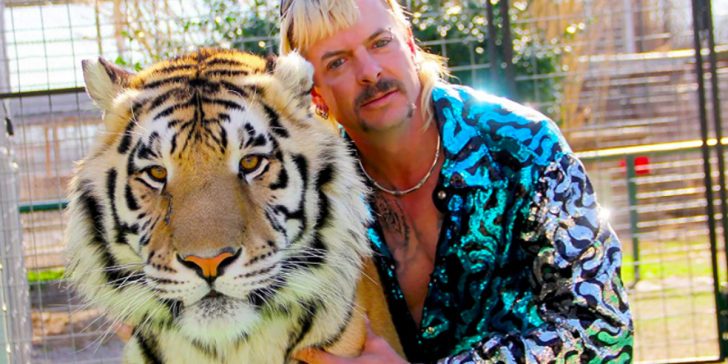 One thing you can’t take away from Netflix is its knack to provide true-life stories that appeal to the binge-watchers and the watercooler-talkers. Much like “Making a Murderer,” the new and highly talked-about limited series “Tiger King” provides viewers some complete access to a wild and crazy world of its own but with cute little tiger cubs. Co-director Eric Goode spent five years documenting all the insanity you have to see to believe.
This seven-episode series centers around a rivalry between two people with a deep love for exotic wildlife. First there’s Joe Exotic, who’s the owner of a roadside zoo in rural Oklahoma full of caged tigers. Then there’s Carole Baskin, an animal rights activist devoted to protecting the livelihood of the big cats. But while Baskin comes off as a peacefully and lovably caring woman, Exotic is a gun-toting zookeeper, who also spotlights as an internet superstar and a country singer pertaining to his relationship with the tigers. In each episode, we explore each of their lives while also experiencing their battles involving online insults and lawsuits.
As the series progress, Joe tries his hands at other ventures like having his own reality show that ends with the studio mysteriously burned down. Then he tried running for president in 2016 before running for state governor only to lose both times. However, once he partners with shady businessman Jeff Lowe to save his zoo is where his life started to spiral out of control. It all comes to a head when he’s arrested for allegedly involved in a murder-for-hire plot to kill Carole.
Joe Exotic is certainly a character that could’ve been made up by some sitcom writer. The way the man dresses, speaks, and sings like an anorexic Toby Keith makes him look like something out of a mid-Western version of Lifestyles of the Rich and Famous. He’s the kind of person you’ll end up either loving or hating from the get-go, but you want to keep watching his exploits not knowing what he’ll do next. Though he did some bad things that ultimately got him arrested, he does come off as a pretty likable character in spite of his own issues.
Rather sticking with the main character throughout the whole thing, the show also goes deeper into the lives of the other oddball participants along with the dangers of raising exotic cats from birth. It makes the miniseries a nicely assembled piece that viewers can digest all the episodes in one sitting. However, having an entire episode on Carole’s alleged cover-up on the disappearance of her late millionaire husband in the late 90s kind of dragged away from the overall point of the show.
By the end of the show, you’ll see yourself having discussions with others, as with any good show. You may also ask questions like who’s really in the right or wrong throughout all of it? Are the animals shown were treated or mistreated by any one of those people? Plus, was Joe being serious or joking about having somebody murder Carole? It’s questions like those that make for interesting conversations between fans. Netflix’s on a roll now between their nominated movies and their true-crime shows, and Tiger King is just the latest in this seemingly endless pile. By now, you may have already seen it and would love to see where the story goes next if the streaming service will do a second season. Or if you haven’t, it’s worth watching especially out of curiosity.