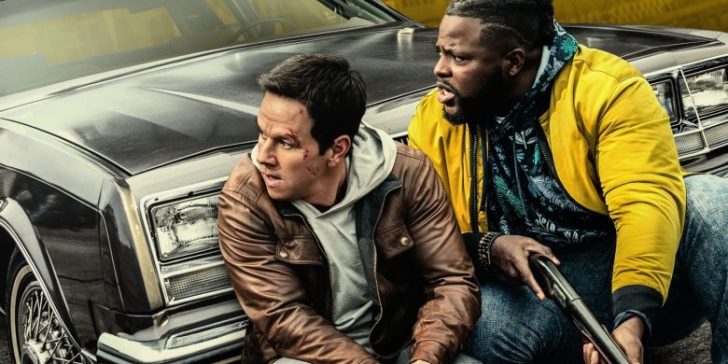 The last time Mark Wahlberg and director Peter Berg worked together on a movie, it was the abysmal “Mile 22.” Whatever magic they had that made “Deepwater Horizon” and “Patriots Day” so great was gone the moment that jumbled mess made it to the screen. Now the pair reunites for their try at making a movie for the mega-popular streaming service Netflix. That movie is their new action/comedy “Spenser Confidential,” which is based on a book series by Robert B. Parker before it made the leap to the small screen in the 1980s with “Spenser: For Hire” with Robert Ulrich and Avery Brooks.
Released from prison after five years for assaulting his police captain, ex-cop Spenser (Wahlberg) hopes to move away from the crime-ridden city of Boston and become a truck driver. His friend and landlord Henry (Alan Arkin) lets him room in with a new roommate, another ex-con and up-and-coming MMA fighter, Hawk (Winston Duke). Later that night, police captain Boylan (Michael Gaston) and young officer Graham (Brandon Scales) are murdered, prompting Spenser to get back into the game. His old partner Driscoll (Bokeem Woodbine) warns him to stay away given his reputation with the other cops.
Teaming up with Hawk, Spenser tries to retrace the steps of the deceased while looking for clues that could reveal the nature of the crime. Eventually, it connects to an earlier case involving drugs, murder, and dirty cops that Boylan was covering up. Now the heroic twosome will have to evade both those responsible and Spenser’s ex-girlfriend Cissy (Iliza Shlesinger) to bring justice back to the city.
Those only familiar with the TV show will be in for quite a shock as the film offers a grittier and darker approach to the original material. Some of the more comedic moments are done with edgy and raunchy language between characters. Considering this is part of a streaming service, content like that is to be expected. It’s more acceptable that the movie takes place in Boston with the heavy Southie accents and raw but humorous personalities, which would be difficult to pull off for any actor who’s not native to the city. Also, having the whole thing actually shot on location in Boston helps enhance the story.
Since it’s a Wahlberg/Berg feature, there’s plenty of stylized action and mass destruction to be found. In fact, it seems he learned his lesson from “Mile 22” and made sure his fight scenes are shot, choreographed, and edited much more clearly making these sequences such highlights of the entire film. However, the director has a continuous problem with handling tone between the comedy and the drama. He would begin one scene with something funny, but then quickly change it to some serious nature before going back to the comedy in the blink of an eye. If he wants to make better action movies, he’ll have to remember just stick to the one necessary tone coherent enough to make it a better experience.
The main actors are mainly bringing their typical performances to this film. Wahlberg has that Boston swagger, Duke is tough but humble, and Arkin is once again funny with his “old man” humor. The best way to describe the acting in the movie is good, but nothing special.
For what it’s worth, “Spenser Confidential” is a masterpiece compared to “Mile 22.” But on its own, it’s an entertaining but average action/comedy with a bit of tonal issues. Still for a Netflix film, you can only do much worse especially when you’re stuck at home and all the movie theaters are closed.

THE MOVIE’S RATING: R (for violence, language throughout, and sexual content)
THE CRITIC’S RATING: 3 Stars (Out of Four)