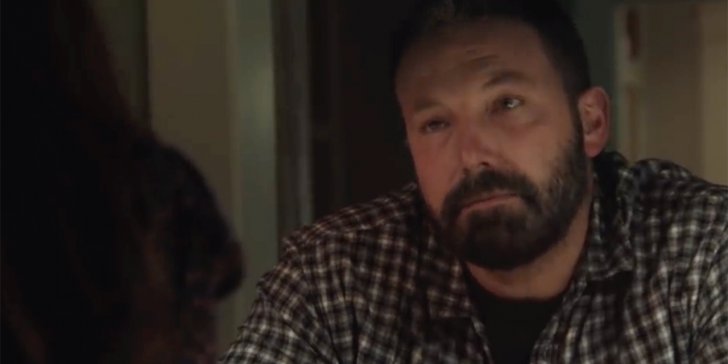 The Way Back
(Warner Bros. Pictures)

Now that he’s given up his bat suit to Robert Pattinson, Ben Affleck returns to serious acting with the sports drama “The Way Back.” Although the movie contains a real sport, basketball, and the players involved, it’s mainly about the struggles of a coach who faces his own internal crisis along the way. It’s a story where it’s not just playing the big game, but how the game of life can be played.
Jack Cunningham (Affleck) was once a star basketball player at his high school, but turned his back from the sport. However, a personal tragedy leads him down a path to alcoholism and isolation from his ex-wife Angela (Janina Gavankar). One day, he gets an offer from his high school’s pastor to be a replacement coach for their basketball team currently having a terrible season. Though he’s still in a dark place, he agrees to the offer and is now coaching team of teens who are completely out of focus with the game.
At first, he’s not able to get them to follow the plays resulting in more loses. But as time goes on, his coaching style gets more unconventional as he’s able to get the team to improve and win more games. Just as the team is about to enter the playoffs, his drinking becomes more of a problem as he has to face his tragedy that brought him there.
In its own way, the movie doesn’t concentrate too much on the game. Instead, it largely focuses on the hardships of someone who has played the game while using it to try to overcome such intense obstacles. The movie still follows similar tropes and clichés like other sport films, but also cleverly adds real dramatic depth to the whole situation. Anyone who has been through such a bad time in their lives can identify with the main character.
But while it deals with the intense drama, the movie is also uplifting with moments that will lift your spirits. Watching the team go through both hardships and triumphs whether or not you’re a fan of the game feels exciting enough like watching a real game. It’s important for the movie to have realistic characters in order to make the experience feel natural. With that said, there are enough likable characters to help keep the story afloat. Plus, there are some hilarious moments that are light enough to be entertaining.
The best thing about this movie is Affleck giving one of his best career-defining performances. It’s worth noting that he used his own recent personal experiences you’ve heard in the tabloids and delivers it in full raw form. In a career full of highs and lows, it seems to parallel with the character’s own journey also full of highs and lows. You have to admire the Boston native for putting a lot of effort in bringing something different than what he has done. Hopefully we’ll see more serious work like this from him in the coming years.
“The Way Back” may be predictable at times, but its touching story and amazing performances makes it more than above average than anyone would think. There’s a certain appeal to it that is accessible for older audiences. It’s a great movie to see for anyone who’s into sports and courageous stories of this sort.
THE MOVIE’S RATING: R (for language throughout including some sexual references)
THE CRITIC’S RATING: 3.5 Stars (Out of Four)