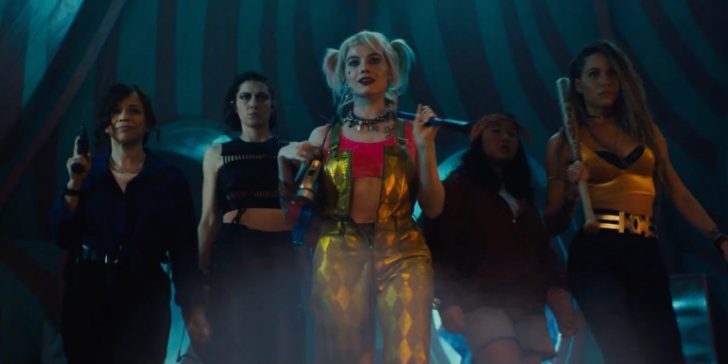 Birds of Prey (And the Fantabulous Emancipation of One Harley Quinn)
(Warner Bros. Pictures/DC)

It’s about time for fans that Harley Quinn, probably the most popular character in the 2016 film “Suicide Squad,” gets a movie of her own. Though no longer part of that group nor with her man The Joker (not the more recent Oscar-winning Joaquin Phoenix version FYI), this could be her chance to shine before finding new friends to make new mayhem with. In this case, the new film simply titled “Birds of Prey” for the sake of this review takes the group’s comic book roots on its head and paint it with pretty colors.
After breaking up with her boyfriend, Mr. J, Quinn (Margot Robbie) tries to rebuild her life, including getting a pet hyena she names Bruce despite her continuous sadness. Worse of all, her breakup makes her a target for every thug and hoodlum she ever came into contact with. But Gotham’s top crime boss Roman Sionis (aka Black Mask) (Ewan McGregor) is too busy with his nightclub, doing extra work with his assassin friend Victor Zsasz (Chris Messina), and going after a special jewel that’ll help him reign over the entire city. His plan hit a snag when teenage pick-pocket Cassandra Cain (Ella Jay Basco) manages to steal the diamond and hide it before being picked up by police.
One thing leads to another and Quinn ends up captured and ordered by Sionis to capture the young criminal and bring him his prized possession. Soon enough, the criminal’s quest gets the attention of other gangs, gung-ho officer Renee Montoya (Rosie Perez), Roman’s singer/driver Black Canary (Jurnee Smollett-Bell), and the mysterious Huntress (Mary Elizabeth Winstead). Eventually, the girls finally crossed paths before they realize they have to work together to battle a common enemy.
Much like “Suicide Squad,” this film maintains the colorful, anarchic attitude, this time with Quinn doing all the mayhem. It also has the character break the fourth wall on occasion a la “Deadpool,” with humorous narration often interrupting the action. Despite the title, the movie is more of the character’s solo adventure and less of a team-up film of the earlier comic book films. In fact, the team-up itself doesn’t occur until way into the third act before the action does intensify. Nevertheless, what you still get is a fun, entertaining, and violent superhero film that never holds back on the brutality.
When looking at the comic book origins of both the characters and the team, longtime fans will naturally have different opinions on how the film version did things differently. It seems this film is pretty faithful to some of the characters and the overall themes in the team-up. The only thing comic book readers will find the most egregious is Cain, since she’s originally a young mute assassin and one-time Batgirl who uses body language for her fighting style, while in this film is just a regular teen girl with a knack for stealing people’s stuff. But if you’re more into watching these movies just for entertainment, then you’ll have plenty to enjoy throughout its two hours.
There’s no denying that Robbie pushes herself into the role with guts and personality, this time with more action and comedic moments that she can handle. The rest of the female cast also delivers plenty to the table each giving their all in both action and humor. Besides Robbie, the movie’s MVP is McGregor, who’s absolutely over-the-top and highly entertaining as the villain with the wild ego.
With DC finally getting their act together, “Birds of Prey” can be seen as a step forward in creating action-packed superhero fare with a harder edge. While not perfect, the filmmakers certainly put their own style and great service to the genre that feels right.
THE MOVIE’S RATING: R (for strong violence and language throughout, and some sexual and drug material)
THE CRITIC’S RATING: 3.5 Stars (Out of Four)