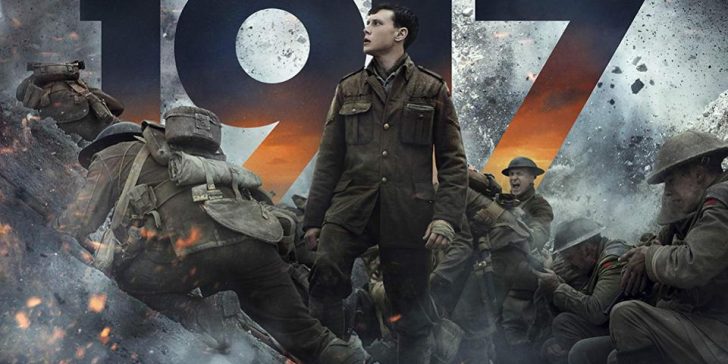 After tackling the two biggest James Bond films, “Skyfall” and “SPECTRE,” Oscar-winning director Sam Mendes returns to his roots by staging his most ambitious film yet. “1917” is also his most personal film, inspired by the stories told to him by his grandfather, who fought in World War I. Another interesting note about the movie is that it’s told in a single take that’s much in the same vein as “Russian Ark” and “Birdman.”
In April 1917, World War I was raging toward its eventual conclusion, with the German army seemingly on the retreat. Lance Corporals Schofield (George MacKay) and Blake (Dean-Charles Chapman) of the British Army get an important mission from their superior General Erinmore (Colin Firth). Apparently, the German army is planning a surprise attack the next morning on another division of the British army and Blake’s brother (Richard Madden) is among them. Now the two corporals will have to send a message to Colonel MacKenzie (Benedict Cumberbatch) before the attack could happen.
When they leave their trench, the two corporals have to cross through No Man’s Land while trying to avoid any enemy contact. Soon enough, they make it to the French countryside confronting more obstacles coming at them. The only question left for them is will they be able to make it to their destination in time.
The movie echoes “Saving Private Ryan” by looking at the horrors of the war from the soldier’s perspective. With its story, it’s told in linear real-time fashion thanks to the innovative, one-take filmmaking. The end result is an exhilarating experience that the viewer alongside the main characters through the intense drama and action. There’s never a moment during the film where you might notice an edit or a simple cut that could’ve ruin the whole thing for the director. In fact, this could be the best one yet in terms of films being told in a single take that puts the other titles to shame.
One thing that also makes this film unique is the attention to detail between sets and costumes. To get the whole thing just right, the people in charge of outside location and set design went above and beyond by making sure every placement of the camera goes right where it could to get the various shots correctly. It’s certainly such a difficult task to pull off, but they did an amazing job and everything on the screen really shows.
If you’re expecting to see a gore-fest like the other modern war films, then you’ll be pretty disappointed. However, the film makes it clear that it’s more about the people involved than the war itself and how being part of it could have a devastating effect especially during that time. The best way to put it is that these themes are still relevant today as when the first World War was fought over a century ago.
The acting from the two main young actors help bring the authenticity to the film in stellar performances as soldiers fighting in the biggest battle of their lives. When you watch them experience terror and death around them, you’re also experiencing it alongside them and it becomes important to have that emotional connection. Some of the more prominent British actors like Firth, Cumberbatch, Madden, Mark Strong, and Andrew Scott have small but important roles in the film, and they all do their usual great work in their own singular scenes.
“1917” is a gritty, moving portrait of life in the front lines that will leave you stunned by both the story and the technical achievements the filmmakers went out of the way to complete. Naturally, it’s worth seeing on the big screen no matter if you’re in the mood for some action or some hard-hitting drama.
THE MOVIE’S RATING: R (for violence, some disturbing images, and language)
THE CRITIC’S RATING: 4 Stars (Out of Four)