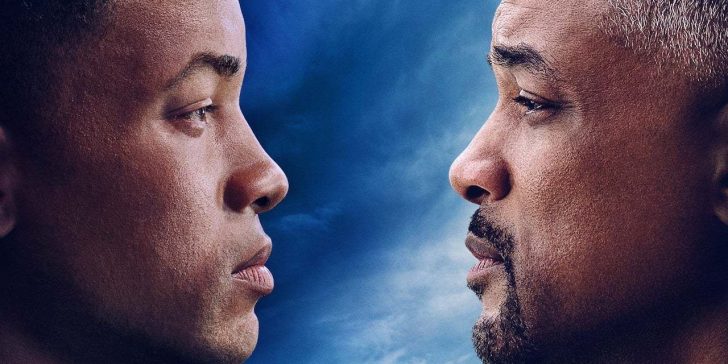 Last summer, Will Smith made a big screen comeback playing the Genie in Disney’s live-action version of “Aladdin,” which made more than a billion worldwide. That movie proved that audiences were ready to see the former Fresh Prince return to his ’90s persona, no matter how much CG work was put into his character. He’s doing it again, for the second time this year but in serious mode with the action/thriller “Gemini Man.” The movie’s directed by Oscar-winner Ang Lee, who employs the latest de-aging technology while presenting the movie in astonishing 120fps.
Henry Brogen (Smith) is a renowned sniper for the U.S. government ready to retire in his early 50s. However, an old friend tells him that a previous hit he did was not the intended target, which means that the government may have lied to him. When agents try to take him out, he escapes, along with a rookie agent named Danny (Mary Elizabeth Winstead) who was keeping surveillance on him. Together with Baron (Benedict Wong), they travel the world to hide out and figure out what’s going on. But Henry being chased by a mysterious assailant (Smith also), who looks a bit like him.
It turns out that the Gemini Corporation, headed by Clay Verris (Clive Owen), specializes in human cloning and used Henry’s blood to create a clone he names Junior, who’s stronger and as intelligent as the original. When he learns the truth, Henry has to stay one step ahead of his killer clone and bring those responsible to justice. But what will happen when the clone learns of his true heritage?
The movie boasts about the groundbreaking filmmaking that went on behind the scenes. First, the de-aging techniques to make the 51-year old Smith look like his younger self circa 1992 is certainly impressive enough to look at that you sometimes forget you’re watching a digital double. Then there’s the film being shot in 120fps as a means to make the motion smooth, like watching on one of those 4K HDTVs you got last Christmas. Unfortunately, most theaters in America (especially here in Maine) have yet to utilize projection at that speed. At least you’re not missing much when you’re watching it in the regular format.
But the advanced technology cannot mask the movie’s uninteresting and mediocre story. It feels like every other 21st century action/thriller, with no reason to exist except try to get more people into the theater. While the action scenes look fine, it’s already done much better in other movies like the more recent James Bond and “Mission: Impossible” series. They did try to add a third act twist to a climatic action scene, but it didn’t do much to make it any more of interest to a tired audience. Any way you see it, it’s another case of “quality over quantity” that’s basically Hollywood’s mentality.
Smith plays the two parts effortlessly, though hearing his actual voice coming out of the digital double feels a bit weird at times. Owen plays the villain just bit two-dimensional, but manages to give a good performance. Both Winstead and Wong also do a good job having gentle and humorous moments with their lead actor.
“Gemini Man” could’ve justified its existence if only the script was actually really good. But even with the impressively groundbreaking CGI, it cannot save the film from simply being bargain bin entertainment.

THE MOVIE’S RATING: PG-13 (for violence and action throughout, and brief strong language)