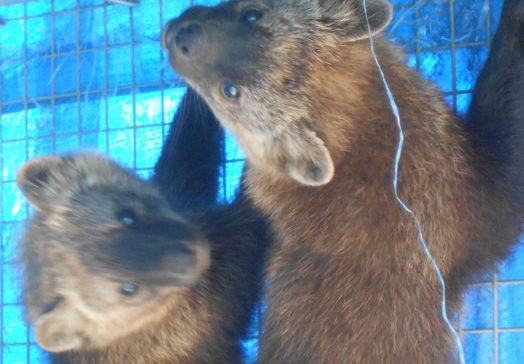 CRITTER CHATTER
Life’s speed bumps might slow you down, but the work must continue
By Carleen Cote

Speed bumps, those elevated sections of pavement designed to slow speeding drivers, are experienced in our lives as well. Our speed bumps were not planned. On Oct. 7, 2015, my husband Donald had been painting a storage building. He got to the third rung on the ladder, felt dizzy and fell off. Experiencing excruciating pain, he was unable to stand or walk, so he crawled across the field to the house. The doctor on call told him he needed an MRI, but it couldn’t be scheduled until Oct. 19.

After weeks of pain and frustration, he finally got an appointment with an orthopedic surgeon, who told him an MRI wouldn’t show anything; he needed a CT scan and blood work done at the hospital. More waiting! The scan showed injuries to the tendons in his knee and a fractured bone. Time passed between multiple doctor appointments until he was told he needed a knee brace.

Getting an appointment with one office to get fitted for the brace would take two weeks, so we found another provider. At his next doctor’s appointment, he was told he needed surgery. That finally happened four weeks later in February 2016. Repairing the injury was not the end of the “speed bumps.” Weeks of physical therapy followed. At that point, he was told he would need a complete knee replacement. That happened last August.

The wildlife at the center still had to be cared for. Our volunteer, Debbie, stopped by after work every week day to handle Donald’s chores, as well as on her three days off. Other friends came to the rescue – Howard and Pat drove Donald to his doctor appointments and shopped for food for the animals. With the help of our friends and volunteers, we made it through the speed bumps!

Baby season arrived in April 2016, as it does every year. Releasing the wildlife wintering at the Center was conducted in May. As I have previously written, rehabbing the raccoons has been discouraging — we lost so many of the 2015 season’s babies to parvo virus. Could we endure another year? Regardless, we took them in.

Two baby fishers had come in from Litchfield. One had climbed out of the tree and was easily taken. With the help of the landowner, the second was retrieved. We had rehabbed two in 2015. It is unusual to get fishers two years in a row. They are fun to work with but get feisty as they get older, especially at mealtime; they are very protective of their food.

Twenty-two fawns came to us last spring as well. We had the usual difficulties — some not wanting to eat. Finally some were coaxed into taking the bottle. In spite of our efforts, only 11 of the fawns survived.

We received a mink, which surprised us because it was friendly. The numbers of raccoons increased, so we had to send porcupines to other rehabbers.

After our last two years of caring for so many sick and dying raccoons, Amy, our long-time volunteer, and I discussed whether or not to take raccoons in 2017. She said “No.” I countered, “If not us, who?”

In June we will celebrate the 21st anniversary of “Critter Chatter.” Friends had been asking me to write about our experiences rehabilitating wildlife; at first I wouldn’t consider it but finally acquiesced and wrote the first article. The rest is history. I appreciate the interest expressed by readers and hope to continue into the future.

Carleen and Donald Cote operate the Duck Pond Wildlife Care Center on Rt. 3 in Vassalboro, a nonprofit facility, supported entirely by the Cotes’ own resources and outside donations. Call them at 445-4326 or write to 1787 N. Belfast Ave., Vassalboro, ME 04989.