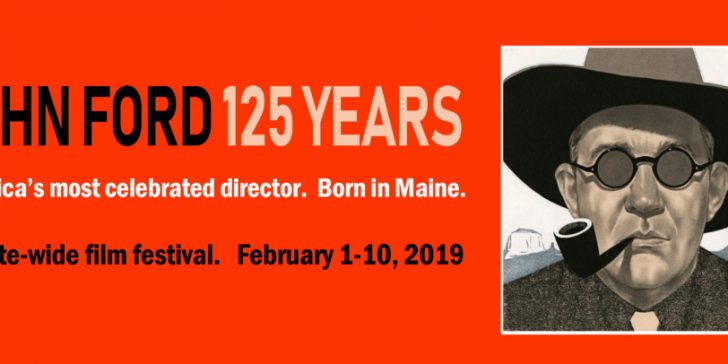 WATERVILLE — More than a dozen arts and education organizations and independent cinemas in nine Maine cities have teamed up for John Ford | 125 Years a state-wide festival of screenings and related programs marking the 125th anniversary of the birth here of America’s most celebrated filmmaker.
John Ford | 125 Years, which will run from Feb. 1 to 10, is a project of Maine Film Center.

Winner of four Academy Awards as Best Director – a standing record – Ford was born in Cape Elizabeth, Feb. 1, 1894. He grew up in the Munjoy Hill part of Portland, the son of Irish immigrants. The experiences of his immigrant roots permeates the characters, music, sensibilities and sentiments of his films.
Ford directed over 140 silent and sound films covering a diverse array of subjects and categories, an incredible number compared to the output of today’s directors. While he was said to introduce himself with “My name is John Ford; I make westerns,” none of his four directing Oscars (or two other Oscars for documentaries) was in the genre for which he became most famous.
“Consciously or not, many filmmakers today have been influenced by Ford; his westerns in particular are touchstones for cinematic language and storytelling,” said Mike Perreault, executive director of Maine Film Center.
In addition to MFC, festival participants include Maine Historical Society; Abbe Museum in Bar Harbor; Farnsworth Art Museum in Rockland; Waterfall Arts in Belfast; the Alamo (Bucksport), Colonial (Belfast), Criterion (Bar Harbor), Eveningstar (Brunswick), Lincoln (Damariscotta) and Strand (Rockland) cinemas; Waterville Opera House; and the cinema studies departments at Bates, Bowdoin and Colby colleges.
“Ford’s a towering Maine figure so we all agreed this milestone shouldn’t pass without recognition from his home state,” Perreault said. “Another MFC program is our annual Maine Student Film & Video Conference, which brings together 250 middle and high school filmmakers and educators. It’s powerful inspiration for these students to learn that such a historic filmmaker emerged from right here in our state.”
Ford made nine pictures in Arizona’s Monument Valley, single-handedly establishing that location as synonymous with Hollywood westerns. Three of these Monument Valley westerns – generally considered among his best – will play on consecutive days during the festival: The Searchers (Feb. 2, Rockland), Stagecoach (Feb. 3, Bar Harbor) and My Darling Clementine (Feb. 4, Brunswick).
All four films for which Ford won the Oscar as Best Director are included in the series: The Grapes of Wrath (Feb. 5, Edmund S. Muskie Room, Bates College, Lewiston), The Quiet Man (Feb. 6, Damariscotta), How Green Was My Valley (Feb. 8, Belfast) and The Informer (Feb. 9, Waterville).
During World War II, Ford was a commissioned Naval Reserve officer supervising a team of filmmakers in the OSS Field Photographic Unit and overseeing production of more than 80 training and documentary films, including two Oscar winners he directed: December 7 (with Gregg Toland) and The Battle of Midway (on which Ford earned a Purple Heart while personally photographing the actual fighting).
Shortly after his discharge from active military service Ford made They Were Expendable (Feb. 7, Bucksport) about PT boat warfare in the Pacific, produced with extensive Navy Department support. Ford’s screen credit: “Directed by John Ford, Captain, USNR.”
Closing out the festival on consecutive nights in Waterville, Feb. 9 and 10, are two films each presenting the same story but from very different perspectives: Ford’s The Informer (Feb. 9), based on Liam O’Flaherty’s novel of the same name, set in 1920s Dublin during the aftermath of the Irish Civil War, and Jules Dassin’s Uptight (Feb. 10) which transfers settings and characters from O’Flaherty’s book to the 1960s Black Power Movement.
Ford was generally condescending of being portrayed as anything other than just a movie director, but this simple description is betrayed by the breadth, substance, style, and scale of his films.
The New Yorker’s Richard Brody says Ford was also “the greatest American political filmmaker.” Within Hollywood Ford was considered a staunch “Roosevelt Democrat,” but in 1947 Ford referred to himself as a “Maine Republican.”
Regardless of political affiliation, John Ford | 125 Years will revisit Ford’s most seminal works and offer audiences the opportunity to re-examine his films in the context of today’s cultural and political landscape.
Author Stanley Crouch writes that “Ford was surely patriotic but not in a simple way; his best work always contains a celebration of the nation and its mythologies as well as its inherent troubles. Ford understood that America’s essential anti-aristocratic attitude was good as long as it was heroic and possessed of a sacrificial sense of duty.”
For more information, visit www.Ford125.com.